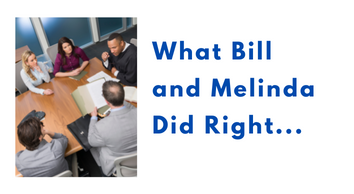 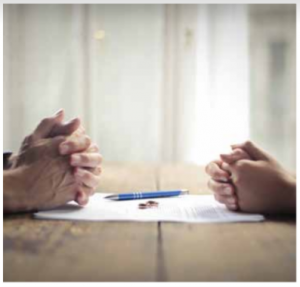 What did Bill and Melinda get right? Not allowing their emotions to rule their decisions, Bill and Melinda Gates seem to have finalized a competent, fast, and effective divorce. They announced their impending divorce on May 4; they had already negotiated a separation agreement. Their divorce was filed and finalized on August 2, less than three months after it was announced.

Although they didn’t provide details to the public of the divorce settlement nor how it was accomplished, typically there would have been a mediated agreement. The parties most likely utilized the skills of a professional mediator, their attorneys, or a combination of both.

The advantages to having a mediated agreement are many. Of utmost importance, it keeps decision-making between the couple and away from a judge. As we have seen, it allows the details of the settlement to remain private and confidential. It speeds up the process and significantly lowers costs, both emotional and financial.

It appears their agreement covered many aspects of their complex lives and marriage. They seemed focused on the well-being of their
adult children. Many times, the guiding light that pulls people through these tough times is their focus on the children’s well-being. It is very
likely each party utilized a team of financial, legal, and possible mental health professionals. Even so, their emotional and monetary costs were a fraction of what a court battle would have been.

Acting or reacting emotionally can stop the progress of moving forward and beyond. What seems to have an impact is to keep values as a priority: wanting to be fair and insulating the children from the problems is key. I’ve observed that people who keep in mind that they once loved this person and chose to create a life with them do much better in divorce than those who want to fight for every dollar and try to find a way to justify the fight. Remember, after the mediation and divorce are done, it’s about your future and that of your children.

I can provide information about out-of-court conflict resolution in divorce, custody/parenting time, families, marriages, workplace
disputes, businesses, trusts and estates, real estate, homeowners associations, as well as problem-solving between individuals. As a
Certified Divorce Financial Analyst®, I am qualified to help you sort through the myriad financial issues that you may be encountering.